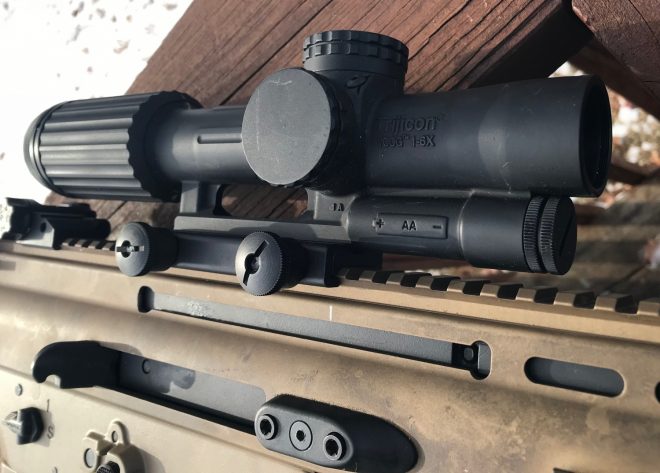 The Trijicon Variable Combat Optic Gunsight (VCOG) line offers a 1-6 power optic built to span the bridge from CQB to medium range targets. Included with the VCOG scope is a thumb screw mount (TA51), one Lithium AA Battery, LENSPEN®, Trijicon logo sticker, Manual, and warranty card.  The VCOG came out in mid-2013 but is still a leading competitor in today’s low variable power optics.  Other models can be purchased with a quick release mount. It is waterproof up to 20 meters and dry nitrogen filled to eliminate fogging.  Also included with the VCOG is a nice protective plastic case with foam cut out inserts. All of the miscellaneous items included seem to be of top quality and properly represent the Gucci scope that they accompany.

Reticle options are based on Bullet Drop Compensator (BDC) options for 7.62x51mm, 5.56x45mm and .300 Blackout. They are offered in a horseshoe and segmented circle type reticle. Illuminated reticle options are either red or green. Illumination can be set to six graduated settings with turnoff points between each setting, allowing for quick and efficient illumination from an “Off” position. Illumination is powered by an AA battery and works very well with lithium batteries for bright and long run times. Trijiconlists the figure of 700 hours on settings of four to six power.

The VCOG was designed with the premise of making an optic that was optimal between contact distance to long range depending on the reticle design chosen. BDC markings for the VCOG stretch out to 800 meters.  The VCOG was designed to have a very generous eye relief of around four inches and was meant to be used with both eyes open (Bindon Aiming Concept). At close ranges, the illuminated reticle and quick acquisition make this an excellent choice that rivals and matches the speed of your standard red dot options. Even without the illumination turned on, the etched reticle is quick to acquire and the segmented circle draws your eyes into the center cross.

The scope has crystal clear glass and is magnified in the first focal plane, eliminating much of the distraction of a second focal plane scope at low powers and providing more of a red dot feel.  When zooming in the reticle is fine and crisp on the bullet drop compensator for easy shot placement from the second hold down. However, the segmented circle makes for quick target acquisition at the closer ranges along. The primary crosshair in the center is too bold for precision applications at extended distances. The center reticle is 1 MOA thick which is helpful in judging size or distance but is oversized when zooming to full power. While it will work for engaging human-sized targets for law enforcement use, smaller targetsmight be hard to accurately and precisely shoot while at a full six power.

Price is a substantial barrier to some who would want to take advantages of a VCOG with an MSRP of $2800. However, the standard retail price often ranges from $2300-2500 depending on the options chosen and provides good quality in return. Savings can even be improved when taking advantage of looking into the used market for a like new VCOG. This optic can take the place of multiple others by effectively doing the job of red dots, fixed 4x ACOGs, and other similar optics. Many competitors charge more for an extended throw lever and mount, both included with the VCOG.

This optic is definitely bridging a gap and has become a lead contender in the race for 1-6 variable poweroptics. For a 1-6 power that will primarily be used for CQB or lower magnification use the quick acquisition, forgiving eye relief, and daylight bright illumination of this scope make it an incredible competitor. After 15 single shot times from the low ready on a 13”x9” steel plate at 15 yards with an average shot time of .51 seconds (recorded with a PACT timer).

Zeroing the optic is very user-friendly as you simply remove the large covers on the turrets. The turrets are very tactile and exact, very similar to quality turrets seen on higher power scopes. No tools are needed for adjustments and dialing back and forth seven clicks provided very consistent impacts on target. Turret adjustments can be done in half-inch adjustments with a 90 minute of angle range for elevation and windage. The mount also proved very consistent, as there was minimal to no shift in zero after the scopewas removed and remounted three times during the course of various range sessions.

True torture testing with freezing, dropping the optic from extended heights, or other highly abusive tests were not done on the VCOG due to the high price tag, however, it has been on a rifle carried without a case for the last 3 years. It has maintained zero despite being subjected to drops at heights up to five feet and no issues have been observed with the optics mechanics or electronics.  No cosmetic wear is visible on the outside of the optic body. The mount has also stayed firmly attached without any loosening of the thumbscrews over time or under recoil. This is despite the fact that it was mounted on a 5.56x45mm NATO SCAR-L. The SCAR can be known to really chew up optics mounts and optics that are mounted to the Picatinny rail on the upper receiver, due to the rifle’s construction.

There are several drawbacks to the scope. One of them is that the reticle has a 1 MOA intersection of stadia lines to allow for better use when not magnified. This is so the difficulty that comes with precision at the six power setting is balanced and will not be an issue with larger targets at long range. While the VCOG is excellent for close quarters, like other low variable power optics you still need to mount your stock to accurately engage your threat. Unlike other red dots when used in adverse shooting positions where you can engage targets as long as you can see the center dot even if not directly behind the optic.

It should be noted that the VCOG is obviously not designed for long range precision shooting, nor is it ideal for this role. Of course, the six power allows a shooter to engage targets out to 800 meters, but if readers are looking for a precision optic to consistently hit steel at 600-1000 meters, don’t rely on the VCOG. The scope is designed for contact distance to mid-range, and this is where it truly excels at with the variable power.

While the sample size of one scope may not fully and truly represent all VCOGs or all the different options offered, the results observed seem to be well echoed by the experiences of other VCOG owners and reviewers. The VCOG is a great option for Military, Law Enforcement, and the armed citizen for duty and defensive use.  The competitor will also likely gravitate to the VCOG and its great speed in addressing greater ranges of distances than a fixed optic wouldn’t allow for. While no one optic will be the best for every application, the VCOG delivers an incredible all-around package and is an incredibly robust and capable package that should be considered by those with the proper budget.