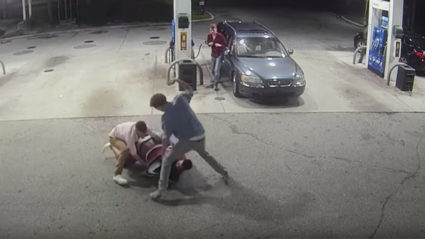 They were celebrating spring break South Florida style and ended up in a life or death struggle with a gunman at a gas station in Oakland Park. When it was all over, the four young men were shaken up but unhurt, the man with the gun got away, and his alleged accomplice was arrested in short order. It happened just before 3:45 a.m. Sunday, outside a Mobil gas station at 901 W. Oakland Park Blvd., the Broward Sheriff’s Office said. The three men from Indiana were staying with Jacob Tanoos — a relative, also from Terre Haute who lives in South Florida now. The four are two sets of brothers who are all cousins. Car experts reveal which cars teeter on the edge of glory, many just one change away from making the leap from good to great. Click to see which models made the list. They were returning from a birthday celebration in Miami Beach for Alec Tanoos, who turned 21 that day.

They pulled into the Mobil on the way home and while one of them was pumping gas, another car pulled up to a nearby fuel island. The gas station’s security surveillance video shows a man with a dark T-shirt covering his face — and a gun in his hand — go over to the men. He pointed the gun at Alec Tanoos’ ribs and said, “Give me everything you got.” And then, a chilling scuffle breaks out. “When I noticed the gun, it was fight mode automatically for me,” said Tanoos’ cousin, Alex Wisbey, 23, the designated driver that night. “I was not going to let my family get injured at any point,” he said. “I knew there was a possibility I could be shot and killed but it’s my family. We’d die for each other.” The alleged accomplice ran over and began pushing the men off the gunman before the two ran back to a black Hyundai Sonata. During the struggle, Jacob Tanoos, 27, cut his hand grabbing the gun barrel. It fell to the ground and his cousin Aric Wisbey, 21, picked it up.

“After we were standing and I had him at gunpoint, he did raise his hands and he was telling me, ‘Calm down, like, give me the gun and we’ll just leave,’’ said Aric Wisbey.

The gunman and his helper drove off, but the men were able to give the car’s tag number to detectives. Less than an hour after the confrontation, Fort Lauderdale police went to the address of the registered owner and saw a man leaning against the Hyundai. He was later identified as Kevin Campbell, 33. “When law enforcement approached, Campbell ran,” said Gina Carter, a spokeswoman for the Broward Sheriff’s Office. “Fort Lauderdale police’s K9 found Campbell hiding in some bushes,” she said. He was arrested on several charges, including robbery with a firearm. The gun, a silver 9mm Taurus, was stolen during a 2017 vehicle burglary, the sheriff’s office said.

The gunman is still on the loose. He is described as stocky, about 6 feet tall, an estimated 210 pounds with dark dreadlocks. “This is really scary,” Carter said. “We would never encourage anyone to do this, but fortunately for them they’re fine. They survived.” Investigators ask anyone with information to contact Broward Sheriff’s Detective Mark Copley at 954-321-4738 or contact Broward Crime Stoppers, anonymously, at 954-493-8477 or online at browardcrimestoppers.org. Tips that lead to an arrest are eligible for a reward of up to $3,000.